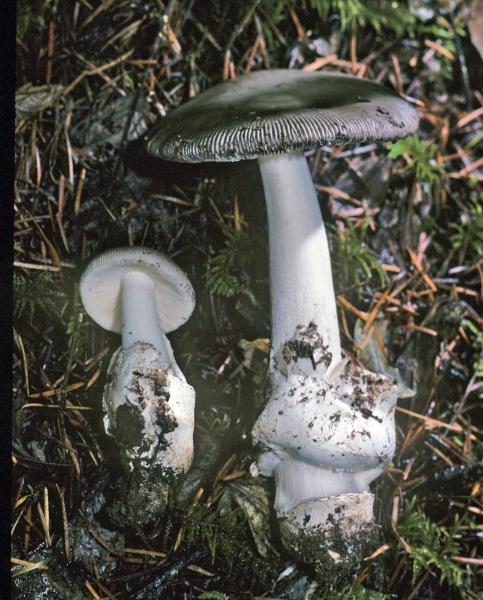 EDIBILITY
yes but be sure of identification (Arora)

SIMILAR SPECIES
The Amanita ceciliae group has a constricted volva but differs from the Amanita constricta group in having a floccose (not membranous) volva, lacking a basal bulb, and having volvar remains that are much darker than those on the A. constricta group. The A. constricta group, like the A. ceciliae group, has a volva that is constricted forming a belt of grayish tissue (often fragmented) around the stem base, but A. constricta often has large patch on cap and it has elliptic to nearly round spores (9.5-13 x 8-10.5 microns) as opposed to round spores (10-14 microns) for A. ceciliae group. Amanita pachycolea and Amanita vaginata do not have a constricted volva.
Habitat
single to scattered or in groups in woods, especially with oaks, (Arora), in "coastal forests where it occurs mainly under hardwoods such as coastal oaks and madrones, but it has, on occasion, also been found under Douglas fir", (Thiers, for California), fall