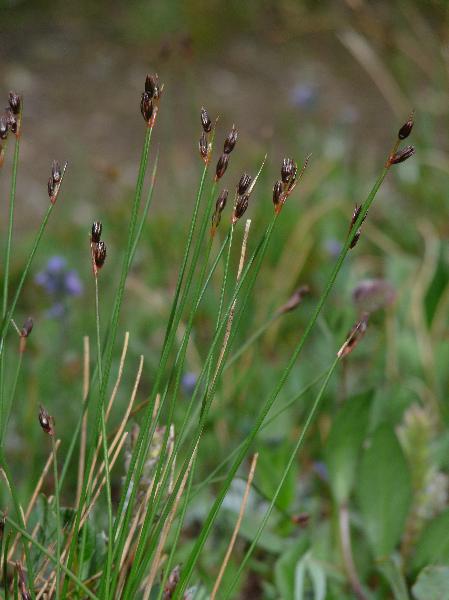 Leaves:
Reduced to sheaths with short awns at the base of the stem, or the uppermost of the basal sheaths with blades less than 1 cm long.

Flowers:
Inflorescence a loose head with 1 to 4, nearly terminal flowers, appearing as if it is on the side of the stem; perianth segments green to brown, pointed, 5-7 mm long, the inner ones slightly shorter; stamens 6; anthers about 1.5 mm long, shorter than the filaments; involucral bract 1-3 cm long, cylindrical, resembling a continuation of the stem.

Fruits:
Capsules, cylindrical, notched, longer than the perianth segments; seeds spindle-shaped, 0.5 mm long with long, tail-like appendages at each end of the seed.

Notes:
Two varieties occur in W North America. Our BC material has been identified as var. drummondii but var. subtriflorus can be expected in S BC.

Mesic to moist rocky slopes, heaths, snowbed sites, streambanks, open forests and meadows in the subalpine and alpine zones; common throughout BC; N to YT and NT, E to AB and S to NM and NV.