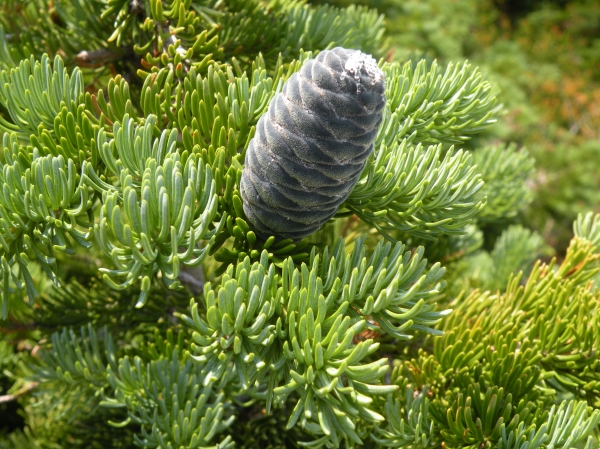 Leaves:
Needles flattened, blunt and usually notched at the tip; bluish-green, flat above, ridged beneath, having stomata on both sufaces; (2) 2.5-3 (4) cm long, tending to curve upwards, not horizontally spreading.

Cones:
Seed cones erect, deep purple, 6-10 (11) cm long, 3-3.5 cm thick, the bracts deciduous; pollen cones bluish. Note: In the recently published Flora of North America, Hunt (1993) recognized Abies lasiocarpa as occurring only along the coast with the interior populations assigned to Abies bifolia. Differences between the two occur in the wood chemistry, lack of crystals in ray parenchyma in A. bifolia, shape of basal bud scales, and color of the periderm. However, introgression occurs throughout most of BC, thus hybrid populations predominate. The only unique populations of A. lasiocarpa are in coastal Alaska. Due to the introgression in BC and the relatively minor morphological differences between the two taxa, we include A. bifolia within A. lasiocarpa.

Moist to mesic slopes in the montane to alpine zones; common in BC in and E of Coast-Cascade Mountains, locally frequent on Vancouver Island; N to S AK and YT, E to SW AB and S to OR, N NV, AZ and NM.