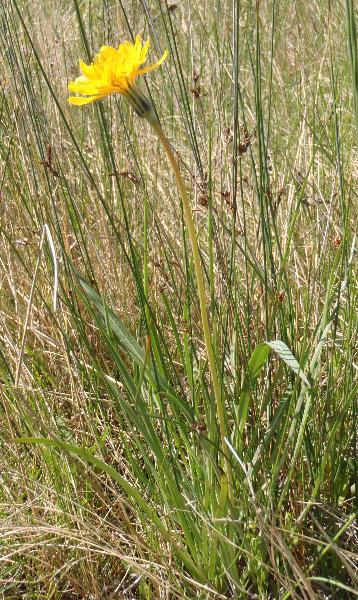 Leaves:
All basal, extremely variable, linear to broadly lanceolate, 5-35 cm long, 1-30 mm wide, entire or toothed to laciniate-pinnatifid or few lobed, glaucous or glabrous or sparsely hairy on the margins and midribs below.

Fruits:
Achenes smooth, long, the body tapering gradually to a stout, grooved beak which is about half as long as the body or, as in ours, more commonly beakless; pappus of numerous hairlike bristles, 10-12 mm long, white.

Mesic to dry grasslands, shrublands, open forests, meadows and scree slopes in the steppe to alpine zones; frequent throughout BC except rare in coastal BC; N to SE AK, E to AB and S to ID, MT and WA.