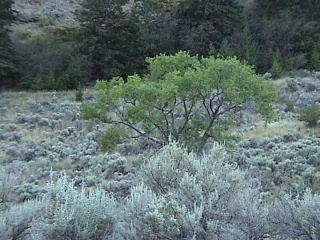 General:
Perennial, aromatic, evergreen shrub; stems solitary or branched from the base with shredding, grey or light brown bark when older, or with a dense, grooved, white-woolly hairiness when young, 0.1-2.0 m tall.

Notes:
Recently, the var. wyominensis Beetle & A. Young has been reported in BC. At the present time, however, our material has not been studied with respect to this variety thus only our two traditional varieties are recognized here. They may be distinguished as follows:

Dry to mesic meadows and slopes in the steppe to subalpine zones; common in SC BC, rare in SE BC; E to AB and S to ND, NM, AZ, and CA.