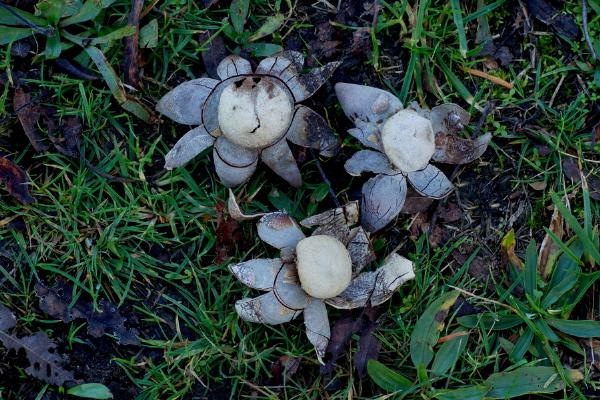 Summary:
Astraeus hygrometricus group represents a hygroscopic earthstar that closes in dry weather but opens in wet weather so that the star-like pointed rays of the outer layer curl out and underneath the spore case. Features include 6-15 rays, papery whitish to grayish or brownish spore case that ruptures through a poorly defined apical pore or slit, a spore mass that is white at first, brown to cocoa brown when mature, sometimes black rhizomorphs, and round finely warted spores. Phosri(1) recognized that several species have been known under this name and as a result of molecular study described 3 new species, Astraeus morganii (similar to Astraeus pteridis), Astraeus telleriae (from Europe), and Astraeus smithii Watling, M.P. Martin & Phosri. Astraeus smithii was confirmed by molecular methods from Michigan and Wisconsin and could be the correct name for the Pacific Northwest species usually called Astraeus hygrometricus [our conclusion]. The distribution is given as central and northern United States. Phosri(1) say it is "characterised by the inner peridium at maturity becoming matted-fibrillose to reticulate, the dark almost blackish rhizoids, and its unique ITS nrDNA". The description is included below.

Notes:
Astraeus 'hygrometricus' sensu auct. mult. found at least in BC (in Redhead(5)), OR (Zeller(2)), AZ, CA, and worldwide in distribution, (Arora), known throughout the United States, and previously reported from AZ, CA, CO, CT, FL, GA, IL, MD, MA, MI, MN, NM, NY, PA, SC, TN, TX, WA, Australia, Canada, Europe, India, Mexico and United Kingdom, (Bates), Oregon State University has collections from OR, AZ, CA, MD, OH, Japan. The Pacific Forestry Centre has collections from BC, and the University of British Columbia has collections from FL, MI, NM, and Japan. Not all of these records would correspond to the Pacific Northwest species.

SIMILAR SPECIES
Astraeus pteridis is larger, ruptures irregularly, and has "thick rays that are frequently checkered like a crooked crossword puzzle", (Arora). A. pteridis is 10-15cm across when open, with the outer surface of the rays having brown fibrils, whereas A. hygrometricus is 1-4cm across when open, often with black rhizomorphs at the base, (Ramsey). Several hygroscopic Geastrum species have a prominently grooved apical pore or spores less than 7.5 microns in diameter, (Arora). Geastrum floriforme is hygroscopic but has a small (up to 1.5cm across) smoother spore case and smaller spores, (Arora). Geastrum recolligens is hygroscopic but is smaller with smaller spores.
Habitat
single, scattered, or gregarious "in old fields, sand or sandy soil, pastures, roadsides, waste places, etc." , (Arora), almost any habitat from sandy dunes to high mountains, September to November, but sometimes keeps it shape and condition for a year or more, (Phillips), on "soil surface margins of woodland, open areas" (Phosri(1) for A. smithii)