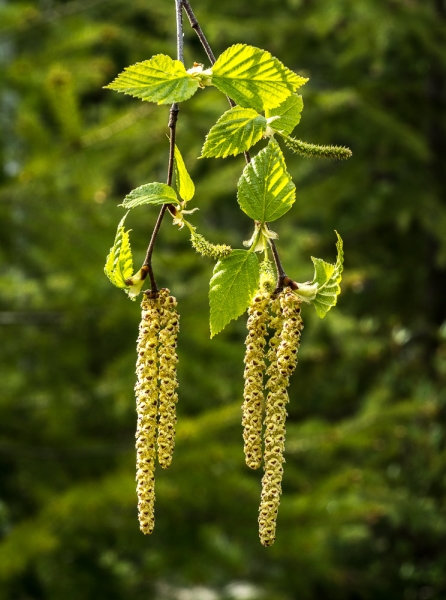 Flowers:
Male and female flowers in separate catkins 2-4 cm long; flowers emerging before or with the leaves; catkins breaking up at maturity.

Fruits:
Nutlets with broad wings, at least twice as wide as the body of the nutlets; bracts with rounded, ascending or diverging lateral lobes.

Notes:
Numerous apparent hybrids between B. papyrifera and B. neoalaskana or B. occidentalis (e.g., B. x utahensis Britt. and B. subcordata Rydb.) have been formally named (see Brayshaw 1996b, Scoggan 1979). Two varieties occur in BC.

Moist to mesic woodlands, forests, clearcuts, burns and open areas in the lowland, steppe and montane zones; var. commutata - frequent in extreme SW BC, var. papyrifera - common throughout BC east of the Coast-Cascade Mountains; N to AK, YT and NT, E to NF, and S to MN, PA, CO and NE OR.