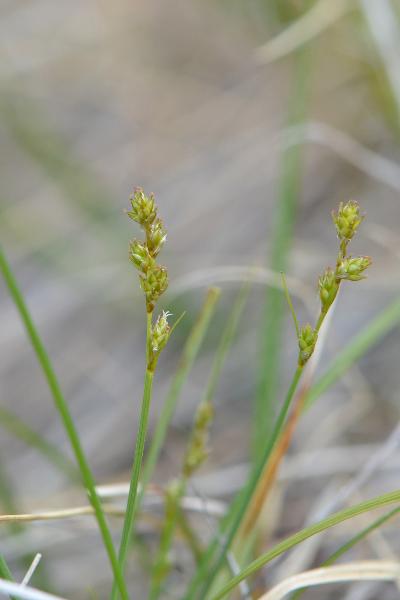 Flowers:
Spikes 4 to 9 in a 3- to 5-cm long, narrow, interrupted inflorescence, occasionally with a few of the uppermost spikes aggregated into a small cluster, egg-shaped, many-flowered, 4-7 mm long, ascending, with both female and male flowers, the female flowers towards the tips, the male flowers inconspicuous; lowermost bract reduced or rarely awnlike, about 0.5 cm long.

Notes:
This is a variable species whose taxonomy and distribution have not been sufficiently studied. Kalela (1965) distinguished the following three subspecies in British Columbia:

2. Spikes forming a terminal head, only the lowermost spike remote; perigynia with weak margins and nerves, olive-brown, with rusty-brown spots when ripe; achenes not entirely filling the perigynia.......................ssp. pacifica Kalela

Bogs, fens and wet sites in forests in the montane and subalpine zones; frequent in N BC, rare in mountains S of 54degreeN; circumpolar, ssp. alaskana - N to AK, YT and NT and E to MB; ssp. pacifica - N to AK and S to WA and ID; ssp. sphaerostachya - N to NT, E to NF and S to ME, MS, SC, TN, OK, CO, UT, NV and OR; Eurasia.