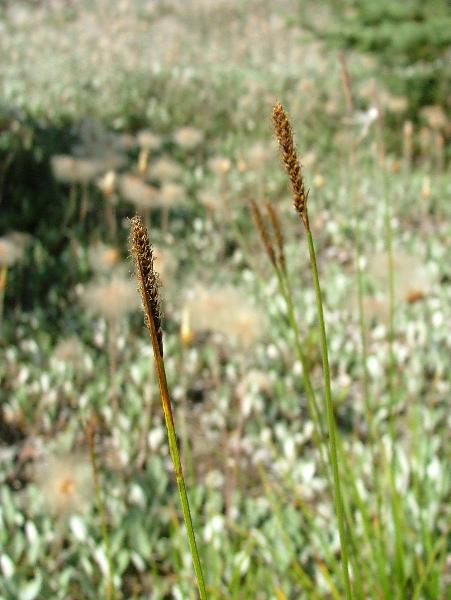 General:
Perennial herb from stout, creeping rhizomes; stems 10-60 cm tall, arising singly or a few together, equalling or longer than the leaves.

1. Perigynia nearly globe-shaped, mostly 2.5-3 mm long and less than 2.5 times as long as wide; achenes short-stalked or unstalked; plants of mesic to dry sites in SC BC or N and SE BC.

2. Stems with the lowest leaves reduced to scales, the flowering ones arising from the current year's vegetative shoots which have conspicuous basal scale leaves; plants mainly of N and SE BC......................... var. scirpoidea

2. Stems with the lowest leaves well developed, clothed at bases with the conspicuous dried-up leaves of the previous year; plants mainly in the Cascades...................... var. pseudoscirpoidea (Rydb.) Cronq.