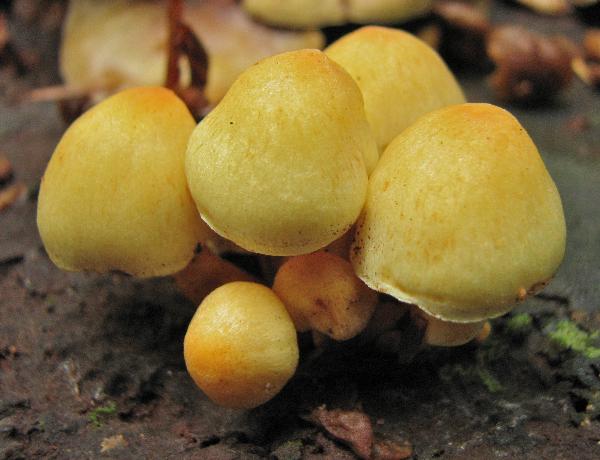 Summary:
Fieldmarks include 1) a non-viscid cap that is orange-yellow to orange brown on the disc, and yellowish to greenish yellow toward the margin, 2) a cap margin often hung with veil remnants, 3) yellow to greenish-yellow gills, 4) a long yellowish to brownish dry stem that often develops rusty or brown stains from the base up, 5) a bitter taste, 6) clustered fruiting on wood, and 7) dark spores. It is common in the Pacific Northwest.

Taste:
very bitter (rarely mild), (Arora), "bitter and astringent after being chewed for a time" (Breitenbach)

SIMILAR SPECIES
Hypholoma capnoides has smoke-gray gills, a mild taste, and larger spores. Hypholoma sublateritium [here considered H. lateritium] has a conspicuously brick-red cap, gills that are never sulphur-green yellow, and a taste that is only slightly bitter, and it generally grows on hardwoods (H. fasciculare on conifers or hardwoods), (Breitenbach). Hypholoma dispersum var. idahoense has a tawny to cinnamon-brown cap, and fruits (in clusters) on conifers, (Arora).
Habitat
gregarious, "usually in tufts or dense clusters on decaying wood of both hardwoods and conifers, but sometimes growing form buried wood or roots and thus appearing terrestrial", (Arora), clustered "in hardwood and coniferous forests, on dead wood such as stumps, roots, branches, etc."; early summer to late fall, (Breitenbach), all year (spring, summer, winter, fall), (Buczacki)