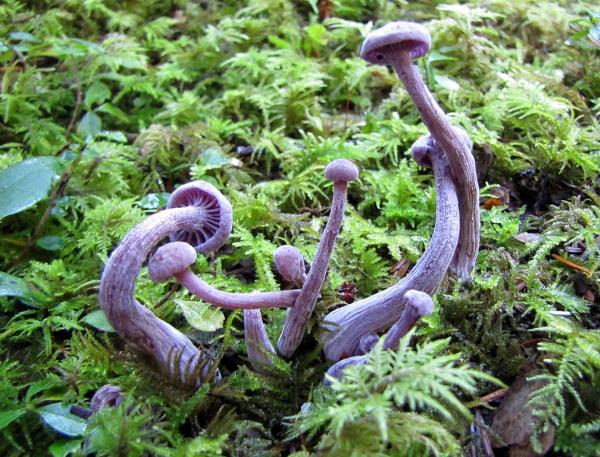 SIMILAR SPECIES
Laccaria amethystina is similar (and in same group) but has nearly round, moderate to long-spined spores, (instead of nearly round to broadly elliptic short-spined spores), and is smaller and less deep purple, (Mueller(1)). It fades to buff or gray rather than vinaceous or buff or brown. The other North American purple Laccaria, Laccaria vinaceobrunnea, is similar but L. amethysteo-occidentalis has robust size, different color of mature fruiting bodies, and microscopically a cap cuticle of scattered fascicles rather than individual perpendicular hyphae, (Mueller(1)). Neither L. amethystina nor L. vinaceobrunnea is known to occur in the Pacific Northwest.
Habitat
scattered to gregarious under conifers, often Pseudotsuga menziesii (Douglas-fir), (Mueller(1)), fall, winter