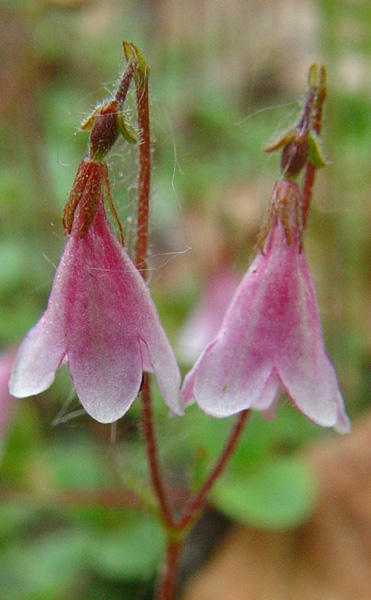 Leaves:
Opposite, simple, short-stalked, egg-shaped to nearly circular, with a few shallow teeth along the upper half, 7-25 mm long, 5-15 mm wide, leathery, dark green above, paler below, glabrous or the stalks and margins of the leaf bases often fringed with long hairs.

Flowers:
Inflorescence of nodding pairs of flowers on slender, erect, Y-shaped stalks that terminate the leafy branchlets; base of flowers cradled by two tiny bracts; corollas slenderly funnel-shaped, 9-16 mm long, pink to whitish, flaring above to 5 lobes, hairy in the throat; styles about as long as corollas, with a tiny knoblike stigma; stamens 4.