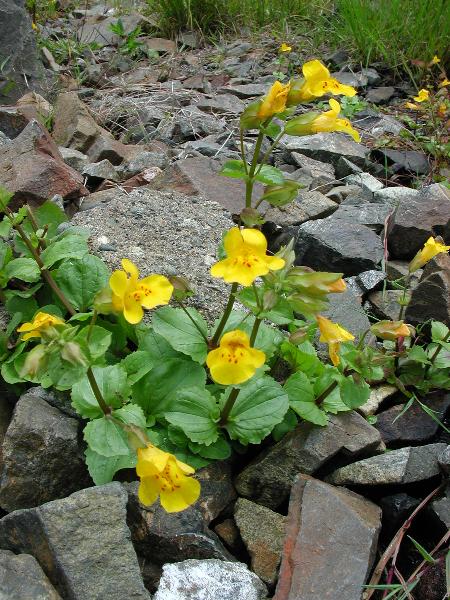 General:
Annual herb from fibrous roots or a perennial from a creeping stolon, rarely from a rhizome; stems stout and erect or sometimes weak and trailing and rooting at the nodes, 5-80 cm tall, simple or branched, smooth or sparsely hairy above.

Leaves:
Opposite, broadly oval to egg-shaped, 1-10 cm long, coarsely and irregularly toothed, palmately 3- to 7-veined from the base, smooth to thinly hairy, the lower leaves stalked, the upper leaves becoming unstalked, clasping-based, reduced in the inflorescence.

Flowers:
Inflorescence a loose, terminal raceme of several to many, or sometimes 1 to few, long-stalked flowers in the axils of the upper leaves, the stalks 1-4 cm long; corollas tubular, broadly funnel-shaped, yellow with maroon markings in the flaring throat, 1-3 (4 ) cm long, strongly 2-lipped, the lips spreading, the upper lip 2-lobed, the lower 3-lobed, densely yellow-hairy at the throat; calyces bell-shaped, green dotted or tinged with red, smooth or minutely hairy, 6-17 mm long in flower, to 20 mm and asymmetrically swollen in fruit, 5-toothed, the upper tooth larger than the others; stamens 4.

Notes:
The ssp. haidensis has been recognized in the Queen Charlotte Islands, but it may not be much different from some of the numerous other forms previously named in this complex (see Hitchcock et al. 1959). 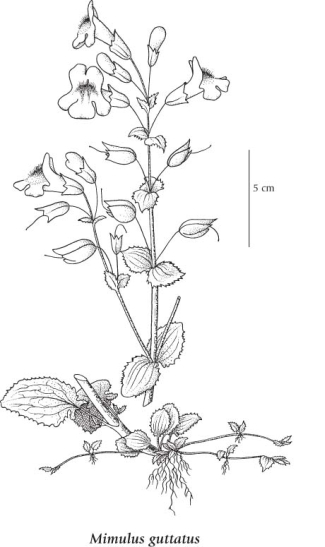