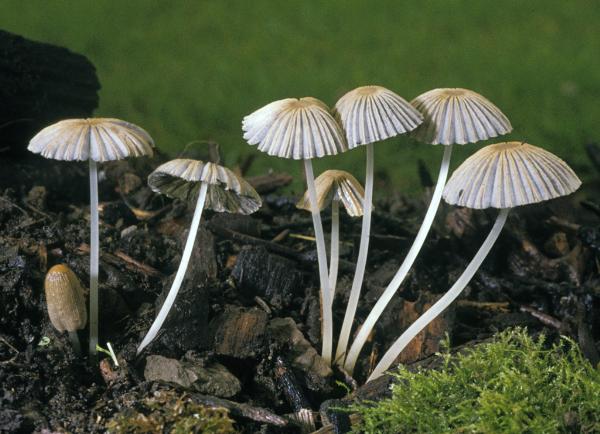 Cap:
1-3cm across when expanded, 0.5-1.5cm high when young, oval or cylindric to conic when young, broadly convex or flat when old; buff to yellow brown, usually with darker (cinnamon brown or fulvous) center, when old becoming grayish except for center; "deeply grooved (pleated) nearly to center", margin sometimes recurved [upturned] when old

Gills:
free but attached to a collar around top of stem, well-spaced, narrow; "soon gray and eventually black, but tending to wither rather than liquefy"

SIMILAR SPECIES
Parasola leiocephala (P.D. Orton) Redhead, Vilgalys & Hopple, found at least in California (where it had often been referred to as Parasola plicatilis), can be reliably differentiated by its smaller spores 8.0-11.0 x 7.0-9.5 x 5.0-7.5 microns, (P. plicatilis is said to be slightly smaller, more grayish, and more restricted to grassy habitats, whereas P. leiocephala is more ecologically variable), (MykoWeb). P. plicatilis is like some other coprinoid species but lacks the cap patches and hairs that many of them have.
Habitat
single, scattered or in small groups in grass, in woods, along paths etc., (Arora), single to numerous in grass and lawns, May to September, (Lincoff(2)), spring, summer, fall