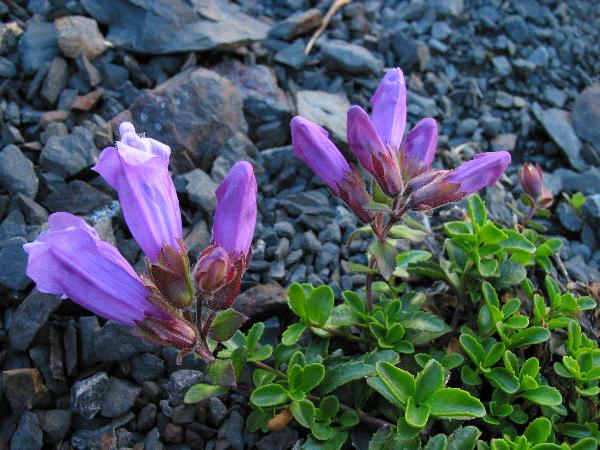 Flowers:
Inflorescence a compact, few-flowered, terminal raceme, the bracts and stalks somewhat glandular-hairy; corollas purple to blue-lavender, tubular, 2-3.5 cm long, distinctly 2-lipped, smooth on the outside, hairy within on the lower lip near its base and on a pair of hairy ridges; calyces 7-10 mm long, smooth to thinly glandular-hairy, 5-lobed, the lobes lanceolate to narrowly egg-shaped; fertile stamens 4, the anthers densely white-woolly; sterile stamen half as long as the fertile stamens, long yellow-bearded toward the tip.

Notes:
Two sympatric, poorly defined (at least in BC) varieties occur in BC:

Dry rock outcrops, slabs, ledges and talus slopes in the montane to alpine zones; frequent in BC in and west of the Coast-Cascade Mountains to 55degreeN, rare on the Queen Charlotte Islands; S to CA.