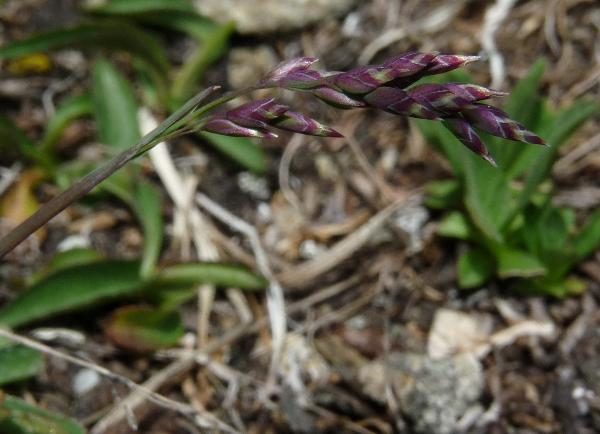 1. Basal tuft of leaves dense, basal shoots arising from within the sheaths, lacking bladeless leaves below; all stem nodes enclosed in the sheaths or the uppermost barely exposed; stem leaf blades similar to, or somewhat broader than those of the basal shoots, rarely flat, blades of basal shoots more or less threadlike, mostly less than 1 mm wide when expanded................ ssp. pallida Soreng

1. Basal tuft of leaves looser, basal shoots, in part, arising externally to the sheath, with bladeless leaves below; at least one stem node well exserted and exposed at maturity; stem leaf blades frequently wider than those of the basal shoots, and flat or folded, basal shoot blades up to 3 mm wide when expanded.

2. Lemmas of at least some of the lower florets of some spikelets very sparsely to moderately hairy on the base of the keels and frequently with a few hairs on the calluses; panicles loosely contracted and with less than 20 spikelets..................... ssp. purpurascens (Vasey) Soreng

Dry to mesic meadows, talus slopes and ridges in the montane to lower alpine zones; ssp. epilis - frequent throughout BC; ssp. pallida - infrequent in SE BC; ssp. purpurascens - frequent in SC and SW BC; ssp. epilis - E to AB and S to CO, UT, NV and CA; ssp. pallida - N to S YT, E to MB and S to ND, CO, UT, NV and CA; ssp. purpurascens - S to CA.