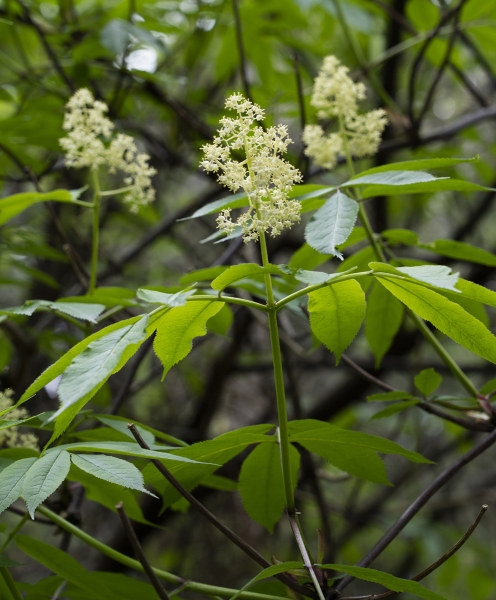 Leaves:
Opposite, stalked, large, compound, pinnately divided into 5-7 elliptic to lanceolate leaflets, often asymmetric at the base, abruptly sharp-pointed at the tip, saw-toothed on the margins, and usually somewhat hairy beneath.

Flowers:
Inflorescence of numerous, small flowers in a 4-10 cm long, egg-shaped to conical cluster with short lateral branches on a stronger central axis; corollas white or cream, wheel-shaped; petals fused at base into a short flat tube that spreads (3-6 mm across) at the top to 5 lobes, the lobes longer than the tubes and becoming reflexed.

Fruits:
Berrylike, globose, 5-6 mm across, shiny red or purplish-black, occasionally brown, yellow, or whitish, but not glaucous, with 3 small, smooth to wrinkled or pebbled stones, each enclosing a seed.

Moist to mesic meadows, ditches, streambanks, grasslands, shrublands, disturbed areas and forests in the lowland, steppe and montane zones; var. ar­borescens is common in and W of the Coast-Cascade Mountains, var. melanocarpa is common E of the Coast-­Cascade Mountains and less frequent to the W of them, var. leucocarpa is infrequent in SC and SE BC; var. arborescens – N to AK and YT and S to CA; var. melanocarpa – E to AB and S to NM, AZ, NV and N CA; var. leucocarpa – E to PQ and NB and S to TN and GA.