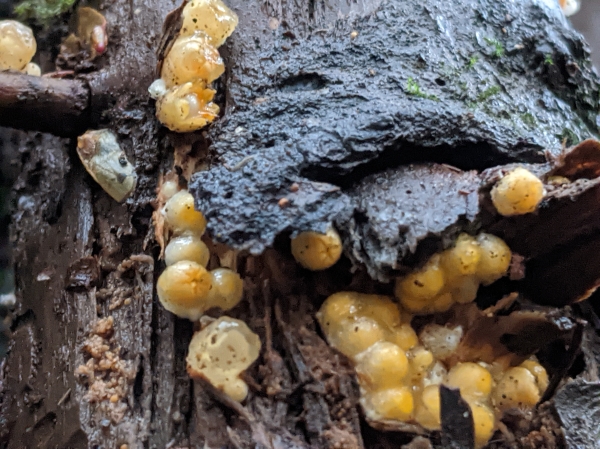 Summary:
Also listed in Bird''s Nests category. Sphaerobolus stellatus produces small, white to dull orange spheres growing gregariously on wood, plant debris, or manure, which split into star-like rays exposing the chestnut brown to olive-black egg which is shot out, leaving the translucent whitish receptacle turned inside out. The spore distribution mechanism is remarkable in that the fungus can project its peridioles up to 6 meters, normally toward the brightest light in its environment, hence acquiring the common names "artillery fungus" and "cannonball fungus". In recent years this fungus has attracted attentions because the peridioles are difficult to remove from house siding, windows, and cars. Basidiospores are stimulated to germinate in the digestive system of mammals that have ingested them with plant material. If they are not ingested, the asexual spores can germinate directly on wood or plant debris. (Geml(2)). The flight of the "egg" has been measured at 14 feet high and 17 feet long, and light is apparently needed for the trigger mechanism as the flight does not happen in the dark, (Arora). Turning on a light in a dark room may trigger the release of the sphere, (Lincoff(2)). Lincoff(1) notes after describing Sphaerobolus stellatus, "On the basis of size and habitat various similar species have been described which may be considered as varieties of S. stellatus: S. giganteus, reaching 4 mm in diameter; S. solen, with cylindrical carpophores; S. stercorarius, globose, completely buried in droppings of herbivores; S. muscosus, covered with an abundant mycelium; S. brasiliensis, like the above with larger spores, 10-12 x 6-7 microns." In 2005 it was discovered that Sphaerobolus iowensis was as common as or more common than S. stellatus (see NOTES under S. iowensis). S. stellatus is traditionally considered with bird''s nests but in Dictionary of the Fungi, 10th Edition, it is assigned to the Geastraceae.

Notes:
Sphaerobolus stellatus has been reported from BC (P. Kroeger, pers. comm.), WA (D. Oliver, pers. comm.), OR (Zeller(2)), ID (Trueblood(1)), and CA (MykoWeb). It is said to be widely distributed in eastern North America west to MI and TX, (Phillips), and throughout eastern United States, west to MI, OH, IA, LA, (Lincoff(2)). It is said to occur in Europe and North Africa, (Courtecuisse), including the United Kingdom (Palmer(1)); however, some of these records may be Sphaerobolus iowensis. The attached photos could also be S. iowensis. Geml(1) confirmed by molecular means a distribution for Sphaerobolus stellatus including at least AK, MA, MD, MN, PA, and the Netherlands, and a map in Geml(2) shows additional data points in OR, CO, MO, and NC.