Introduction to the Algae 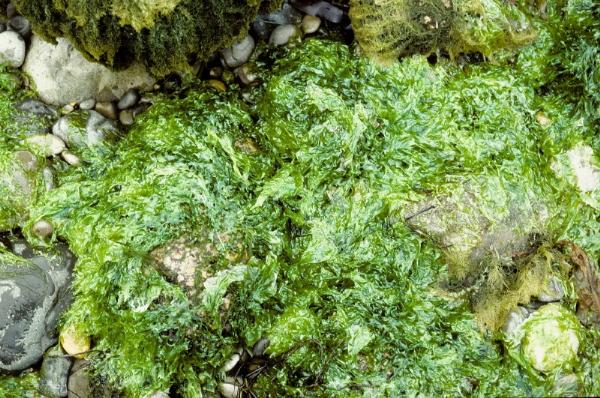 Species description:
Sea Lettuce, like Sea Hair (Enteromorpha intestinalis), has an isomorphic alternation of generations, so the gametophytic and sporophytic organisms are indistinguishable. The blade originates as a small tube growing from an inconspicuous holdfast. The walls of this tube are one cell layer thick. This tube grows rapidly and soon collapses, consequently the broad blade that forms is two cell layers thick. Because of this double-layered structure, the organism is not as transparent as Monostroma (it is difficult to read newspapers through it, for example) and you cannot tear it quite as easily, but you will need to examine numerous examples of both of these species before you become comfortable with these qualitative distinctions. Species of Ulva are, however, reported to be unable to withstand moderate wave shear. Monostroma and Ulva are also distinguished by comparing the base where they attach to the substratum. Monostroma has parts of the blade forming a 360° circle at the point of attachment whereas Ulva exhibits a distinct stipe that expands into a blade in a plane rather than being encircled by blade tissue.

Individuals collected from Southern British Columbia/northern Washington State withstood a week of immersion in water at a temperature of 25°C (77°F) but died when placed in warmer water, making this one of the most thermally tolerant of all our algae.
Sea Lettuce usually has numerous small holes scattered throughout the blade except near the edges; it looks as if tiny snails had been rasping at it. Some species of Ulva are eaten by limpets in California and probably elsewhere as well.

Recently, United States east coast specimens of a related species, Ulva lactuca, were shown to contain subtances apparently toxic to gammarid amphipods, preventing them from feeding on it when it was alive and healthy. Perhaps local Sea Lettuce contains similar compounds. If so, this would be unfortunate for the grazers because it has a high caloric value (4.4 Calories per gram of dry weight), but fortunate for the alga.

The growth form (thin sheets) of Ulva allows it to absorb transient high concentrations of ammonium and grow rapidly. It also grows quickly at high light levels and is a superior competitor somewhat higher on the shore than many other algae can grow.